I had been looking forward to my interview with archeologist, Paul Huey. I had heard so much about his landmark research in finding the first remains of Fort Orange, the first permanent Dutch settlement in New Netherland, on the site that is the present-day city of Albany, New York. It was built in 1624. During our almost 2 hour discussion Paul described in intricate detail how his research had begun and after several years and many twists and turns the excavation process had finally been completed. Near the end of our meeting he asks me if I knew about the finding of the ‘Brazilian coin’ that showed evidence it was owned and used by an enslaved African during the 18th century. I had not, but I was intrigued. I was given the opportunity to actually see and hold the coin in my hands. My spirit quickened as I felt I was coming in direct contact with our ancestors.. While there is not inconclusive evidence who wore it, I was immediately reminded that even though all attempts had been made from the beginning of ‘chattel slavery’ to strip enslaved Africans of their culture and identity, Africans had made a way to not only preserve their culture, but as a sign of ‘resistance’, ensured its survival. Below is the story about how the coin was discovered and its possible meanings. 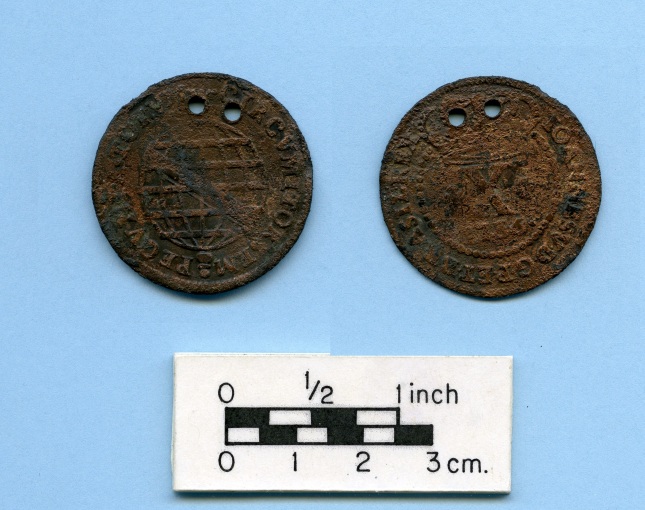 Image made of the front and back of the coin

A New Look at an Old Object – by, Paul Huey

The re-examination of older archeological collections often produces valuable results. New sources of information sometimes enable the identification of previously unidentified artifacts and old collections and excavation records can be used to answer new research questions. In 1972, Bureau of Historic Sites archaeologists monitored excavations for the installation of new electrical conduits in downtown Albany, retrieving and recording artifacts to be used for research about Dutch and English colonial history. One of them, an eighteenth century coin, had never been identified. The coin, made of copper alloy, is 32 mm in diameter, featuring a globe on one side and a crown, a large ‘X’, and the date 1736 on the other. Two holes had been drilled through the edge so that it could only be worn as a pendant. In 2004, thanks to an Internet search, the coin was identified as a 10 reis coin (Brazilian currency) from Brazil.

The coin was found in an 18th Century soil layer (an early street level) deep under State Street, opposite the Northwest corner of James Street. Research indicates that the corner is the site of the 17th Century residence of Anneke Jans Bogardus. After Bogardus’ death in Albany in 1663, the lot passed to the Ten Broeck family and subsequently to Luycas Wyngaerd, who left it to his cousin, Albany merchant Simon Veeder (1709-1786). Veeder probably built a new house there, and in the early 19th Century, given that only a very few individuals of Spanish or Portuguese origin lived in the Albany area during this period.

During the 18th century, Brazil was an important source of cocoa, coffee, sugar and tobacco. The tobacco was used in the trade with Native Americans. Brazil depended heavily on enslaved African labor to produce these products. Such goods came to America via England, which dominated the trade network with Portugal and Brazil. There were also direct ‘voyages’ between New York and Barbados that included the importation of the enslaved. It is possible that the coin found its way to Albany with the purchase of a captive African from Brazil. In fact, in 1800, Volkert Veeder ‘owned one slave’.

Pierced coins worn by enslaved Africans to ward off evil spirits…have been found by archaeologists at many Southern plantation sites. However, this pierced coin with its large ‘X’ could have had many meanings. Some Native Americans attributed supernatural power to the symbol ‘X’, or it may have represented the four directions, winds, or elements. In Native American pictographs, an ‘X’ was often used to represent a person as part of a record, and Native American tattoos often included this symbol.

While the history of Albany’s Brazilian coin remains a mystery, today increasingly advanced research tools offer new opportunities to reexamine and reinterpreted previously excavated artifacts, helping to expand our knowledge of earlier cultures, places and events.” Another theory is that the pendant was taken off an African captive by an enslaver, who would not have allowed any ‘symbol’ or talisman to be worn. During that time, anything was possible.

The rare coins will be on display in an upcoming exhibition at the Senate House State Historic Site in Kingston, NY. The site housed the first meeting of New York’s newly organized State Senate. Built in 1676, only 12 years after the British assumed control of New York from the Dutch, the house reflects both the building traditions of the original Dutch colonists and the gradual acceptance of English construction styles.The new exhibition will present newly translated Dutch documents that gives new insight into inner workings (transactions, land deeds, etc.) of the period and the close nit network of the prominent families that inhabited the region, like the Schuylers and Ten Broecks.

Posted by suriamjennifer on May 13, 2016 in Black Heritage Tours New York, Uncategorized